Editorial Note
This is a copy of an open letter sent to Township of Langley Council on October 13,2018 by Watchers of Langley Forests(WOLF). the Salmon River Enhancement Society(SRES), and the Bertrand Creek Enhancement Society(BCES), You may remember this letter. It was originally sent by WOLF and SRES on October 7,2014. Since then ToL has sold for development one property in Aldergrove, rezoned for development a property in Brookswood, and clearcut in anticipation of development Horne Pit in Brookswood. Since the issues raised are still outstanding and neglected by Township. WOLF, SRES and a new participant BCES have joined together to re-issue the letter. The test has been modified only slightly to reflect the passage of time. The specific request for a meeting before the November 2014 municipal elections should
be seen as a historical reference only.

An Open Letter to Mayor and Council

On March 20(2014), the Langley Times reported that Township staff were preparing a report for Township Council identifying Township-owned properties that could be sold to pay for future infrastructure in Langley Township. We the undersigned, are concerned about the implications of this article. Six months(now four years) have passed without this staff report being made public. We write to you with the assumption that it has not yet been presented to Council.

As the article acknowledges, past and present policy with regard to the sale of what the Township has identified as “surplus property” has generated much controversy. The approach that the Township has taken appears to many to be secretive and reactive. There is an obvious need for a process with greater transparency, one grounded in sound planning.

The lands belonging to the Township are the collective property of the community of Langley. Decisions regarding the management of 'surplus properties' greatly impact the public good and will affect the patterns of future development in the neighbourhoods in which they are located. Decisions regarding the sale or retention of these lands  must take a long-term view. We are particularly concerned that the ecological value of  'surplus properties'  be given greater consideration.

Under the current approach, it appears that the Township has proceeded without adequately considering or  informing itself about the ecology of parcels placed on the market. It has therefore been left to individual citizens and community groups to bring these issues to the attention of Council and Staff. In response to protest Township has made ad hoc corrections that have failed to address the larger problem. The danger that significant ecosystems could be lost remains.

Although heartened by the implication that the above mentioned staff report will be released to the public upon receipt by Council, there are a number of additional steps that we feel Mayor and Council can undertake.

2) Develop a comprehensive inventory of Township lands that would be publicly accessible on the web. In time this could include the results of ecological surveys of individual properties that have been prepared by public or private entities.

3)  Prepare a comprehensive plan for the sale and retention of Township lands that takes into account the ecological value of particular parcels. The impact on Langley aquifers from any resulting destruction of forests and wetlands must be considered. The Township should  commit itself to the principle that our natural heritage should not be sacrificed in the development of modern amenities.

4) Council has made it a uniform practice to invoke Section 90 of the Community Charter as a way of closing meetings of Council to the public when land sales are under consideration. The resulting lack of transparency compounds the difficulties in the issues already discussed. When a sale is well-advised, this practice hinders maximum advertising to prospective buyers, and when a sale is ill-advised it prevents the public from seeing their elected representatives debate the proposal. The public interest is thus served by greater transparency in both instances.Only exceptional circumstances can justify invoking Section 90 in the circumstance  of land sales. We strongly urge Council to invoke Section 90 sparingly in the case of land sales and on a case by case basis.

5)The comprehensive plan should recognize that although a policy of selling off real estate to generate capital can have merit in some circumstances care must be taken that land worth more monetarily in the future could be lost through poor planning. Holding on to 'surplus properties' may also provide a much needed source of income in the future.

Finally, we urge Council to take these steps in a timely manner so that the ensuing discussion and debate on Council and amongst the public can begin before, and not after, the upcoming municipal election this November(2014). We would encourage Council and staff to begin the  process by meeting with community groups prior to November 1st. We would be pleased to participate in such a meeting.

*The above groups have reviewed this letter and being convinced that the issue  is an important one that should be addressed they have joined together to send this letter.

Posted by Watchers Of Langley Forests at 18:16 No comments:

This is a reminder for WOLF members and a notice for interested public that Watchers of Langley Forests will be having our 3rd Annual General Meeting on Wednesday June 29,2016 at the BC Farm Museum (9131 King Street) at 6:30 pm. The main purpose of the meeting will be receive a report from the Board of Directors, a Treasurer's report, and to fill those seats on the Board of Directors that are up for election.

As I explained in an email to the members  a while back the Directors have decided that in stead  of having a guest speaker for the AGM  a meeting of the general membership will be held to discuss the ongoing business of WOLF immediately after the AGM. We are calling it a semi-regular meeting because we don't know how much they will be tied to the calendar.

On the agenda of that semi-regular meeting will be the subject of the forest at Gloucester Estates. A post about that issue will be out Tuesday.


AGM to be followed by a (Semi-)Regular Meeting of W.O.L.F.

We will be electing a Board of Directors. If you are interested in serving on the Board please contact Kirk Robertson.
Posted by Watchers Of Langley Forests at 04:19 3 comments:

Last week saw us reach the two year anniversary of the dedication of what is now know as the Blaauw Eco Forest. It seems a fitting time to remember how we got to that moment. The School of Arts and Music at Trinity Western University will be hosting an event next Saturday October 3 that will celebrate the Han Shan Project. Susan McCaslin, award winning poet and organizer of the original event in December 2012, will speak at this free and public event. This is part of a Conference on Arts and the Environment to be held at Trinity Western University.

To learn more go here. As mentioned above this event is free and open to the public. Attendees who register for free have the  option to purchase a lunch.
Posted by Watchers Of Langley Forests at 04:30 1 comment:

CHANGE OF VENUE FOR WOLF AGM

Due to circumstance beyond the control of Watchers of Langley Forests the WOLF AGM cannot be held at the venue of the Community Hall. The new venue is at the Riverside Room at the back of the building where the Fort Pub is located.The meeting will still be held at 1 pm May 24. The address is 9277 Glover Road but the best way to access is to walk in from Billy Brown Road through Le'lem Square.


The date and time of Sunday May 24 at 1 pm remains the same.

Posted by Watchers Of Langley Forests at 00:09 No comments:

UPDATE    Due to circumstance beyond the control of Watchers of Langley Forests the WOLF AGM cannot be held at the venue of the Community Hall. The new venue is at the
Riverside Room at the back of the building where the Fort Pub is located.The meeting will still be held at 1 pm May 24. The address is 9277 Glover Road but the best way to access is to walk in from Billy Brown Road through Le'lem Square.


Watchers of Langley Forests(WOLF) will be holding its 2nd Annual General Meeting on May
24 at 1 pm at(see above for new venue). The membership of WOLF will gather to elect a portion of the Board of Directors. Mark Haddock,a professor of environmental law at the University of Victoria and a Langley Township resident will be the featured speaker.

WOLF is a forest conservation group in the Township of Langley. In its short period of
existence the members of WOLF have seen highs and lows. It was established in 2012 to
campaign against the sale of what is now known as the Blaauw Eco Forest in the Glen Valley
area of Langley Thanks to the generosity of the Blaauw family the Blaauw Eco forest has
since been aside as an educational,research, and conservation area for Trinity Western
University.Since January 2014 much of WOLF’s efforts were focused on persuading
Township Council not to sell Creekside Forest, an urban forest in the Aldergrove area. In early
March Council voted five to four to proceed with the sale.


Featured speaker Mark Haddock will talk about how the successful campaign to save the
Blaauw Forest relates to the conservation of old growth forests in a provincial context.
The address for the Fort Langley Community Hall is 9167 Glover Road.The membership fee
for WOLF is ten dollars.

Posted by Watchers Of Langley Forests at 13:50 No comments:

UPDATE  Due to circumstance beyond the control of Watchers of Langley Forests the WOLF AGM cannot be held at the venue of the Community Hall. The new venue is at the

Riverside Room at the back of the building where the Fort Pub is located.The meeting will still be held at 1 pm May 24.

We will be electing a Board of Directors. If you are interested in serving on the Board please contact Kirk Robertson.
Posted by Watchers Of Langley Forests at 13:42 No comments:

GLENN RYDER - A CELEBRATION OF LIFE 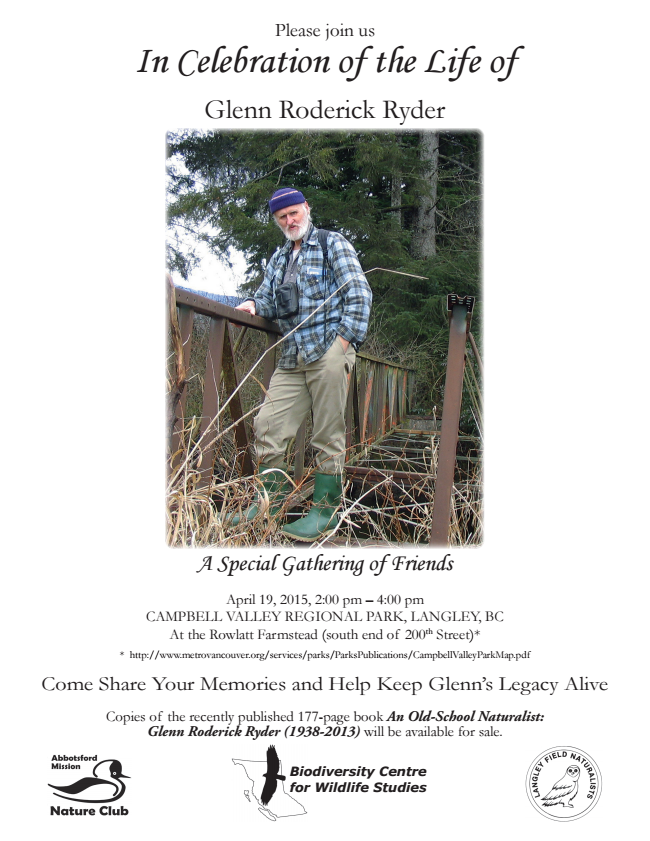 Posted by Watchers Of Langley Forests at 04:11 No comments:

To be added to our Email list for important updates, information and events.